A dieline is the shape and size of a die, a tool that cuts or scores (makes an indentation) printed materials. The manufacturer often makes a new, custom die to cut out a sticker. Your job as a designer is to indicate where stickers should be cut with the dielines you make on the artwork. For stickers, it’s important to leave space between the cut edge of the sticker and the artwork, and to make the cut edge of the sticker shape smooth, so people can peel stickers easily without tearing.

Here are 3 ways to make a dieline in Adobe Illustrator. I liked using the “Tracing” workspace. In the Window drop-down menu select Workspace > Tracing.

Make a dieline from a complex vector illustration

The Alice illustration has quite a few shapes when we look at it in Outline mode. You can do this by choosing Outline from the View drop-down menu. We’ll use Pathfinder, Path Tools, and the Pen Tool to make dielines from the illustration.

Copy the illustration, make a new die layer, paste the copy directly on top of the art on the first layer. In the Edit drop-down menu, select Paste In Place. Lock the first layer by clicking on the lock icon and turn off its visibility by unclicking the eye icon next to the layer name in the Layers panel. Select the illustration on the die layer. Open the Pathfinder window from the Window drop-down menu. Click the Unite icon—it looks like two white squares on top of each other—under the Shape Modes pane. This makes a single path around the illustration edges. 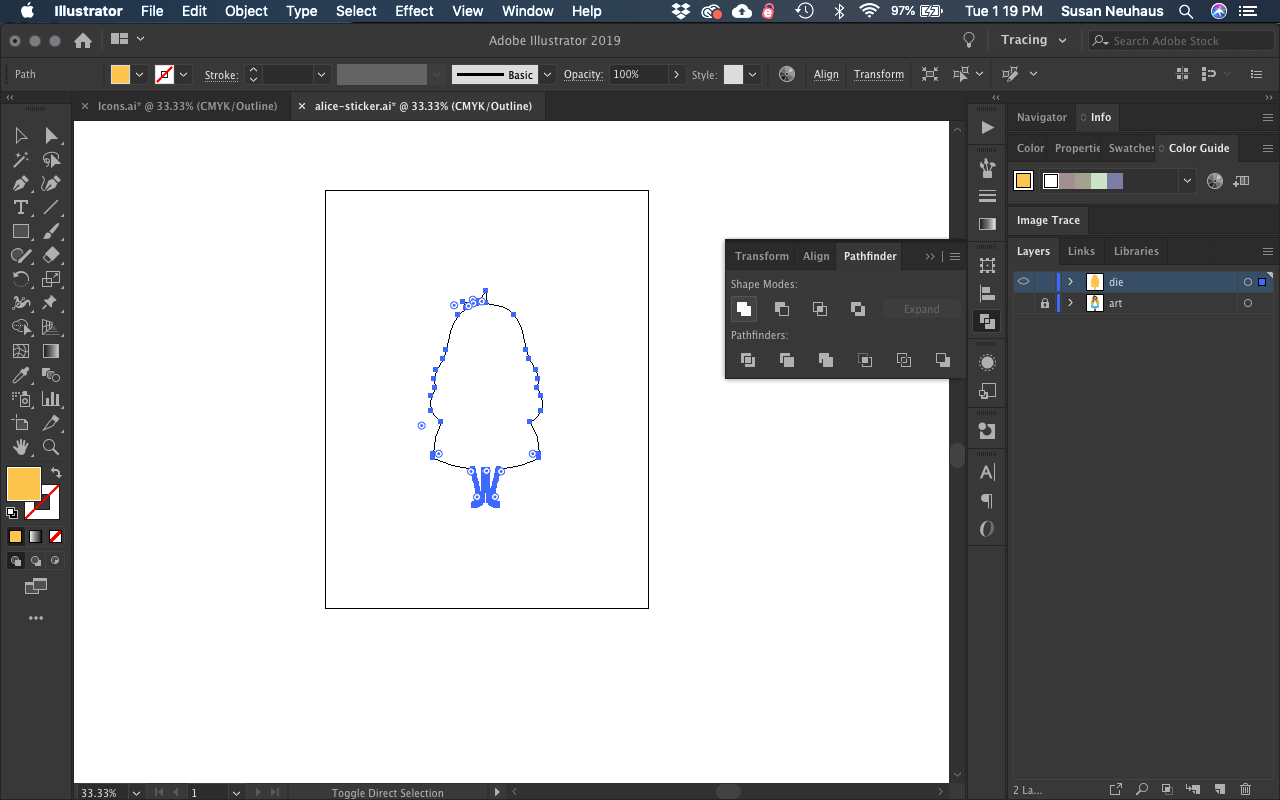 Create the dielines 10 pt away from the artwork edges. Choose Path > Offset Path… from the Object drop-down menu. Set the Offset to 10 pt. and choose Round in the Joins pop-up menu. Delete illustration silhouette on die layer, leaving offset path. 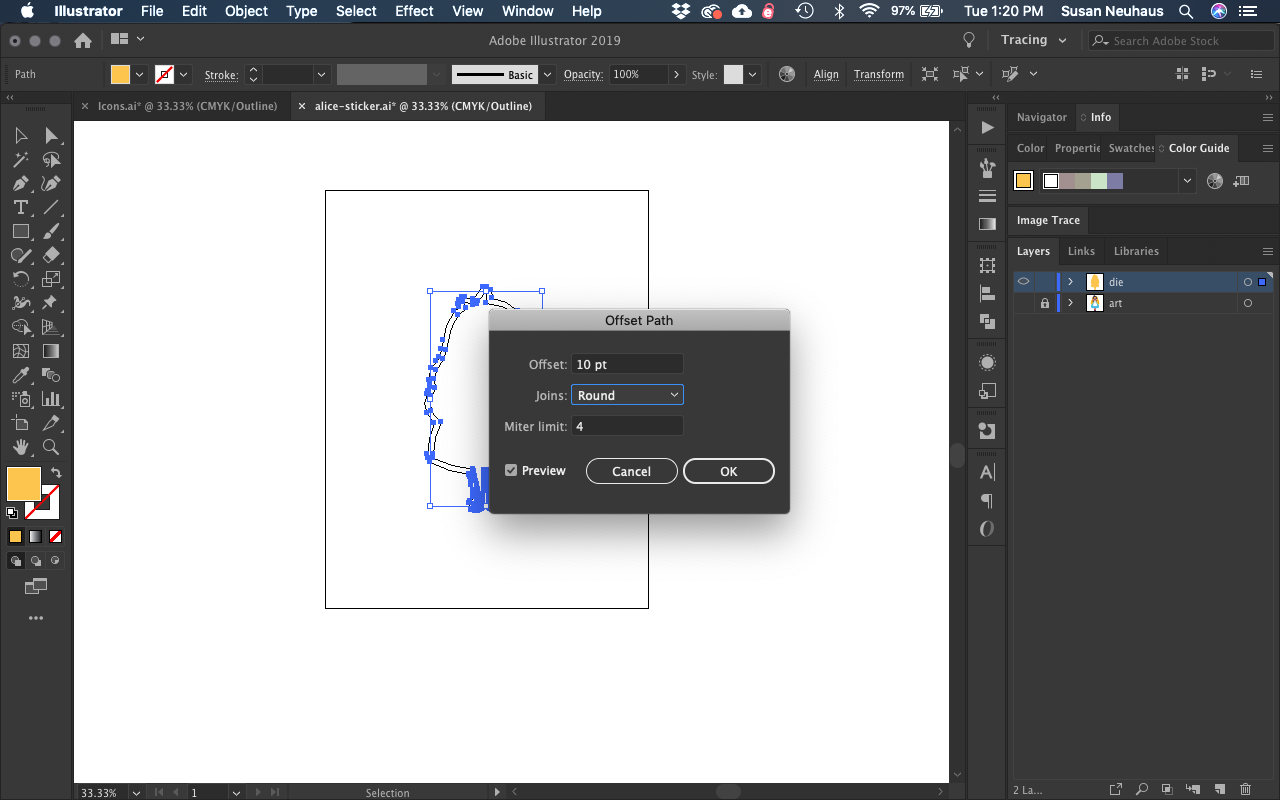 Click the Eye icon in the layers panel next to the layer with your illustration. You can see the art with the dieline around it. Your dieline probably has some sharp corners and lumpy curves. Notice the sharp corner above the bow in Alice’s hair. You can try a quick fix – use Illustrator’s Simplify path command. In the Object drop-down menu choose Path > Simplify. I liked the results I got from these settings, 60% curve < 109°. You can use the Preview feature to test what works for your project, select the Preview checkbox. If more clean up is needed you can use the using the Pen Tool to turn sharp corners into curves and smooth out lumpy curves point-by-point. Add, remove, and adjust anchor point handles as needed. This is much faster if you know the key commands for the modes of the Pen Tool.

? Add Point Tool: press the = sign for both Mac and Windows

? Delete Point Tool: press the – sign in both Mac and Windows

? Direct Selection Tool—so you can select a single point on the dieline path— press the letter A in both Mac and Windows

Make a 10 pt circle and use it to check that the die lines are 10 pt away from the art. Adjust the dielines as needed. Delete the circles so they don’t accidentally end up printing in the final artwork. Draw a dieline where it should be simple

The Path Tools we used to make a dieline around Alice would make a lot of ins and outs around this branch and leaves. It is faster to draw a simple shape using Illustrator’s drawing tools. Put 10 pt circles at corners of the artwork to visualize the space you’ll need between the artwork and the cut edge of the sticker. Lock this layer. Make a new layer for the dielines and lock the first layer. Set colors to fill none, stroke 100% magenta in the Toolbar. Draw lines from circle to circle using pen tool or curvature tool. You can use the drawing tool that is the most comfortable for you Clean up and smooth out the dieline if it is sharp or lumpy by choosing Path > Simplify from the Object drop-down menu. Then edit it point-by-point using the Pen tool modes if the path still needs smoothing.

Delete the circles you used for spacing. 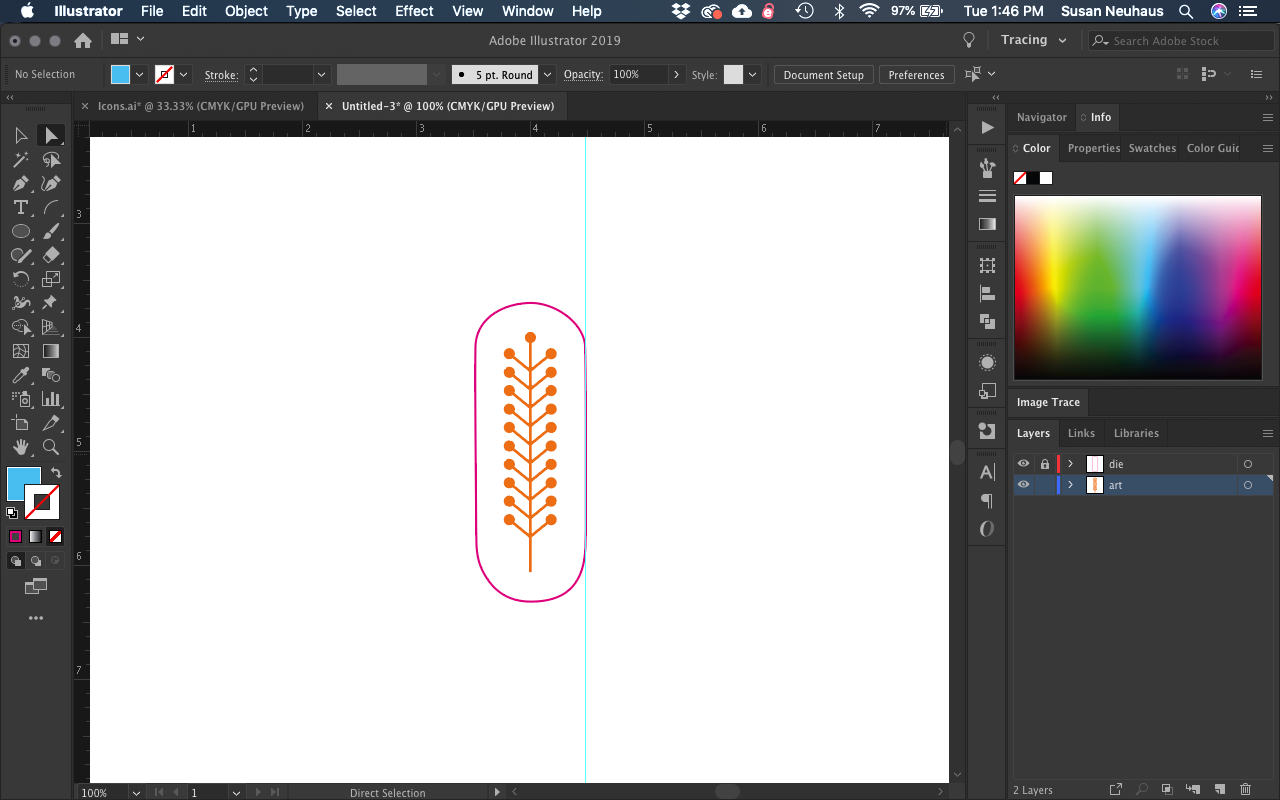 Use Trace Image to make a dieline of non-vector Art

The hiding bunny artwork is not a vector, but a jpg. There are no paths for the Path Tools method. You can use illustrator’s Trace Filter to make the dieline for this illustration. Select the illustration, and then choose Image Trace: Object > Image Trace. Use the Silhouettes presets from the pop-up menu. When you’ve adjusted the settings and are satisfied you have the best shape that Trace Image can create, click the Expand button. This makes a vector silhouette of the illustration. Style the resulting vector shape with no fill, 100% magenta. Turn on visibility for the first layer, you can see that the illustration has a magenta outline. 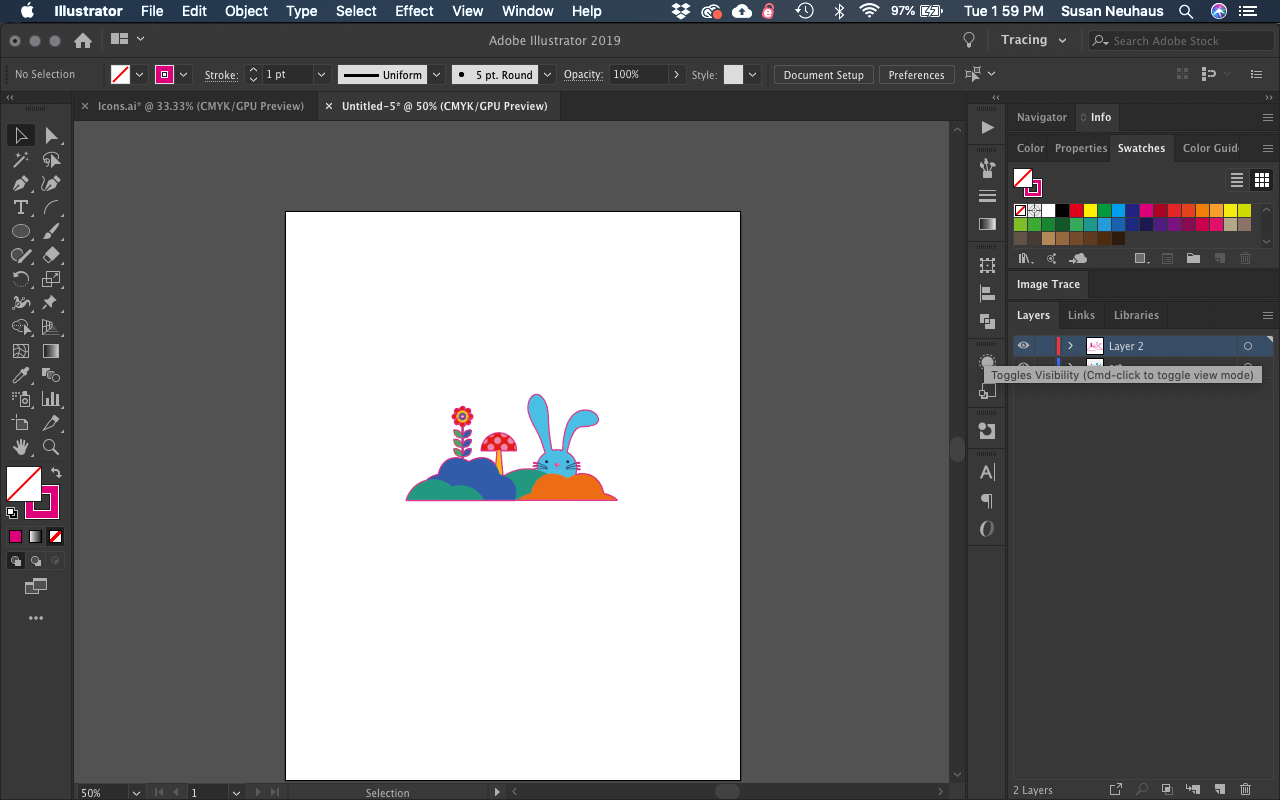 1. Offset path using the instructions above. 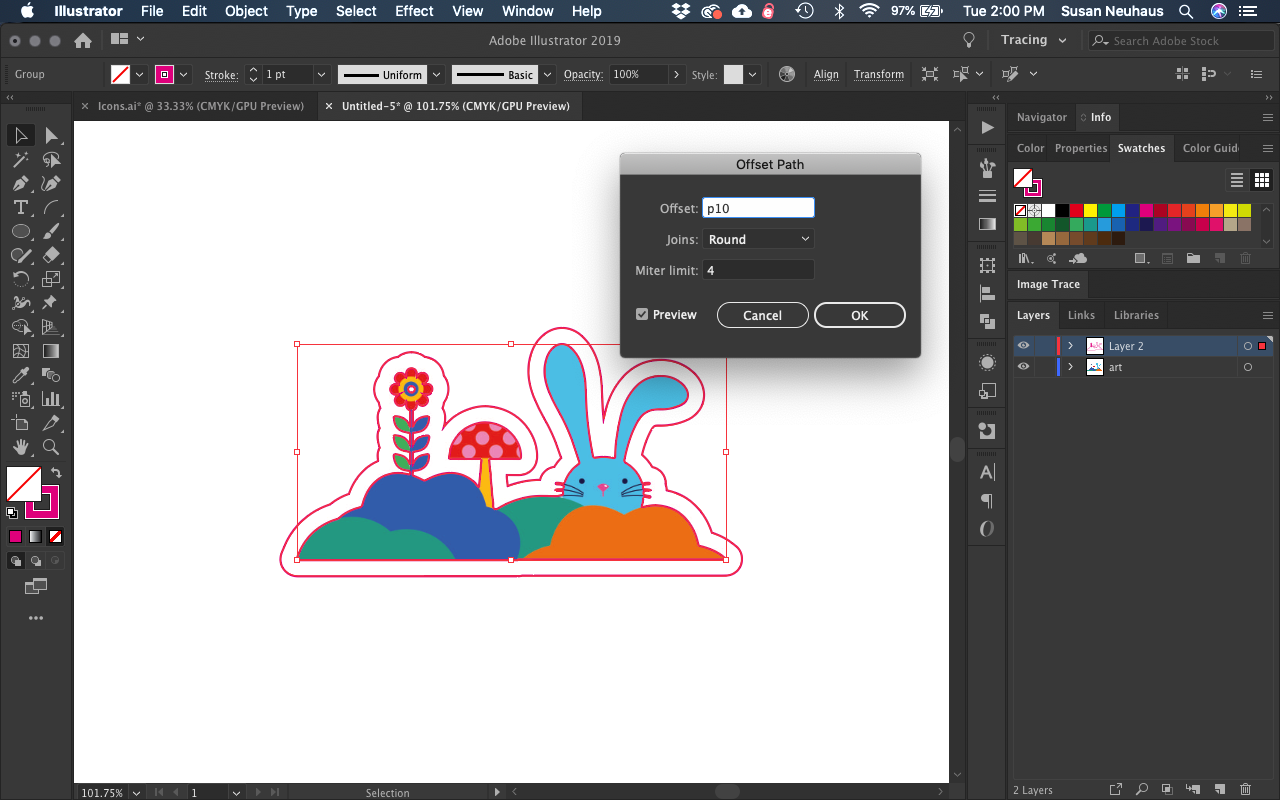 Clean up sharp corners and confirm the distance between the artwork and the dielines with circles, described above.

The dieline needed to be fixed between the mushroom and the bunny ears. It would have been easy for the edge of the mushroom to be torn off. First I used the Simplify Path Method. This improved the dieline a little. 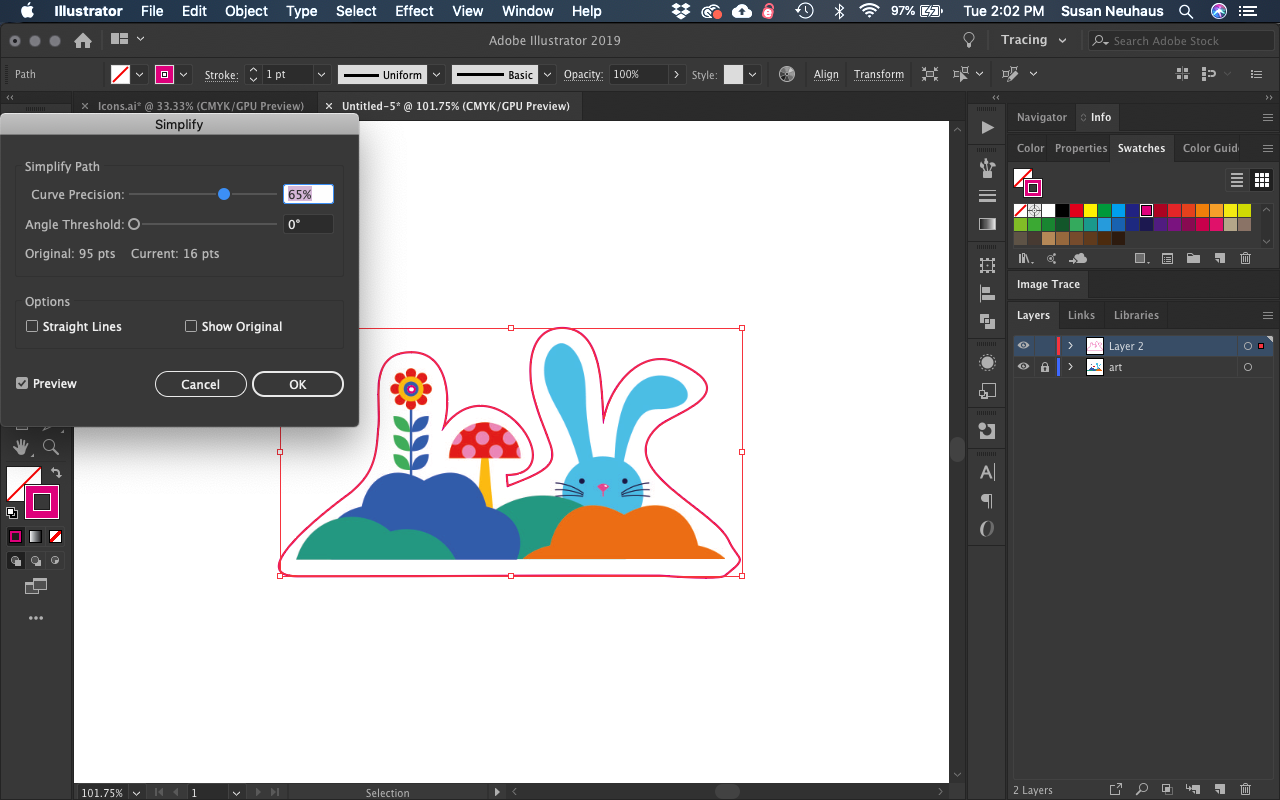 I used the Pen Tool and spacer circles to adjust the dieline point by point. 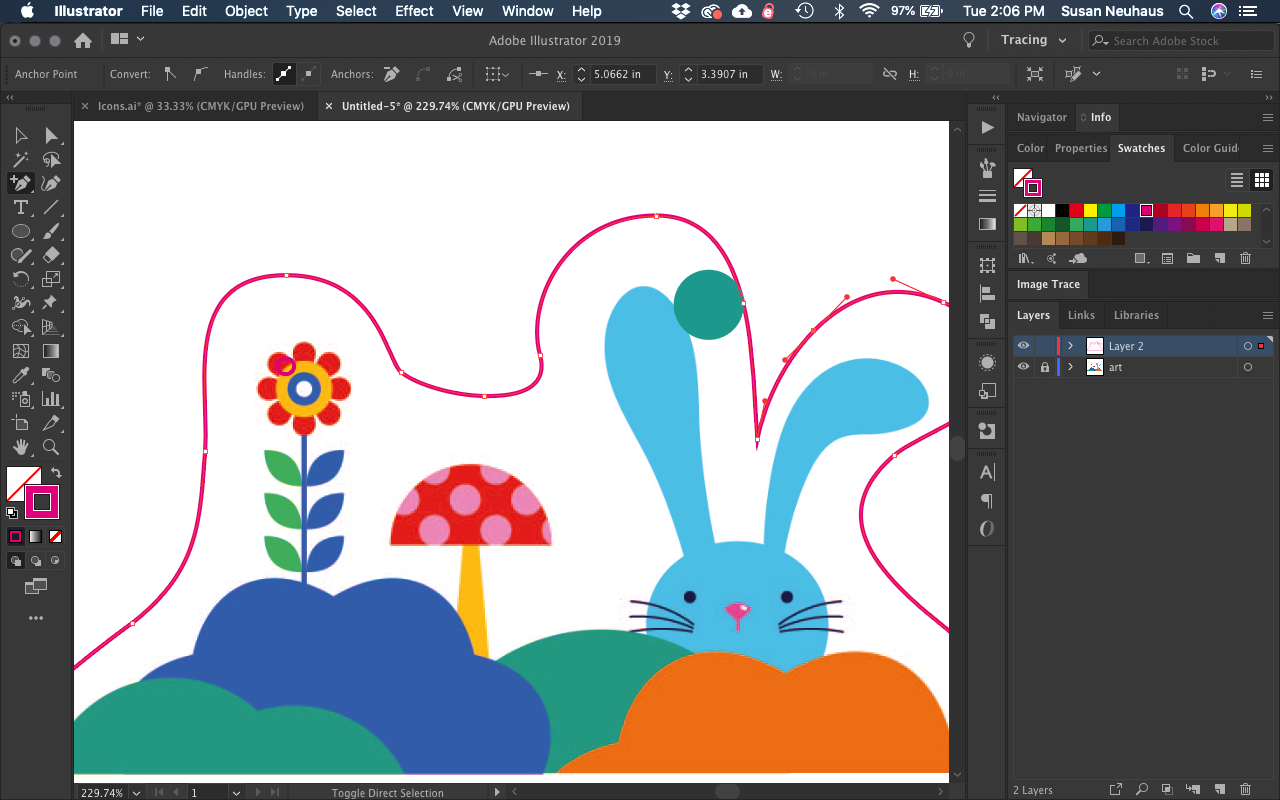 Warning: I noticed a random circle in the flower on the left. You can see it in the screenshot above, slightly off center on a red petal. Reviewing my screenshots, I discovered it was made when I traced the illustration because the white center of the flower looked like a counter space to the Trace filter. Once I found the circle, it was easy to delete. It’s worth checking your dieline in case an unexpected path was generated in the Tracing process.

How to Draw Cables in Photoshop