We launched indesign.uservoice.com this week and someone posted an item wishing that InDesign would create “auto tabs” like the compugraphic 7500 (see here). As far as I can tell, InDesign does offer a feature just like this. The problem is that almost no one knows about it. Let’s change that here.

As far as I can tell, the key is that people want a way to add an equal amount of space between items on a line, without having to worry about setting tab stops. For example, we want to add space between the name and phone number, and between the number and the address:

There are two tricks to do this: First, you need to Justify the text, and second you need to replace the spaces with Flush Spaces:

See how the flush space fills up all the required space? In other words, it adds the same amount of space between each “section” of text — just like auto-tab! But no tabs were involved! I didn’t have to set any tab stops or anything. To insert a flush space, you typically need to use the Insert White Space menu (in the context menu or in the Type menu): 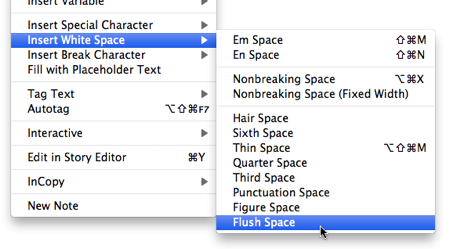 You could, of course, add your own keyboard shortcut to that character if you were going to use it a lot (with Edit > Keyboard Shortcuts).

Note that in this example, there is only one line, not even followed by a return, so I had to use the Forced Justify alignment instead of the normal left justify:

Now, the magical thing about the flush space is that it can update easily, always adjusting each space so that you always have the same amount distributed across the line. For example, here I’ve added another flush space and then one more word:

Of course, auto-tab — I mean flush space — isn’t for all tabular material. It only evens out the space between each “chunk” on a line. So it won’t work for something like a table:

We talked about flush spaces a long time ago, back in podcast episode 28.

Do you use flush space? Do use it in different ways? Let us know below!

InDesign Users: Sign Up for the Online Copy Editing Beta

Scripts from the Crypts